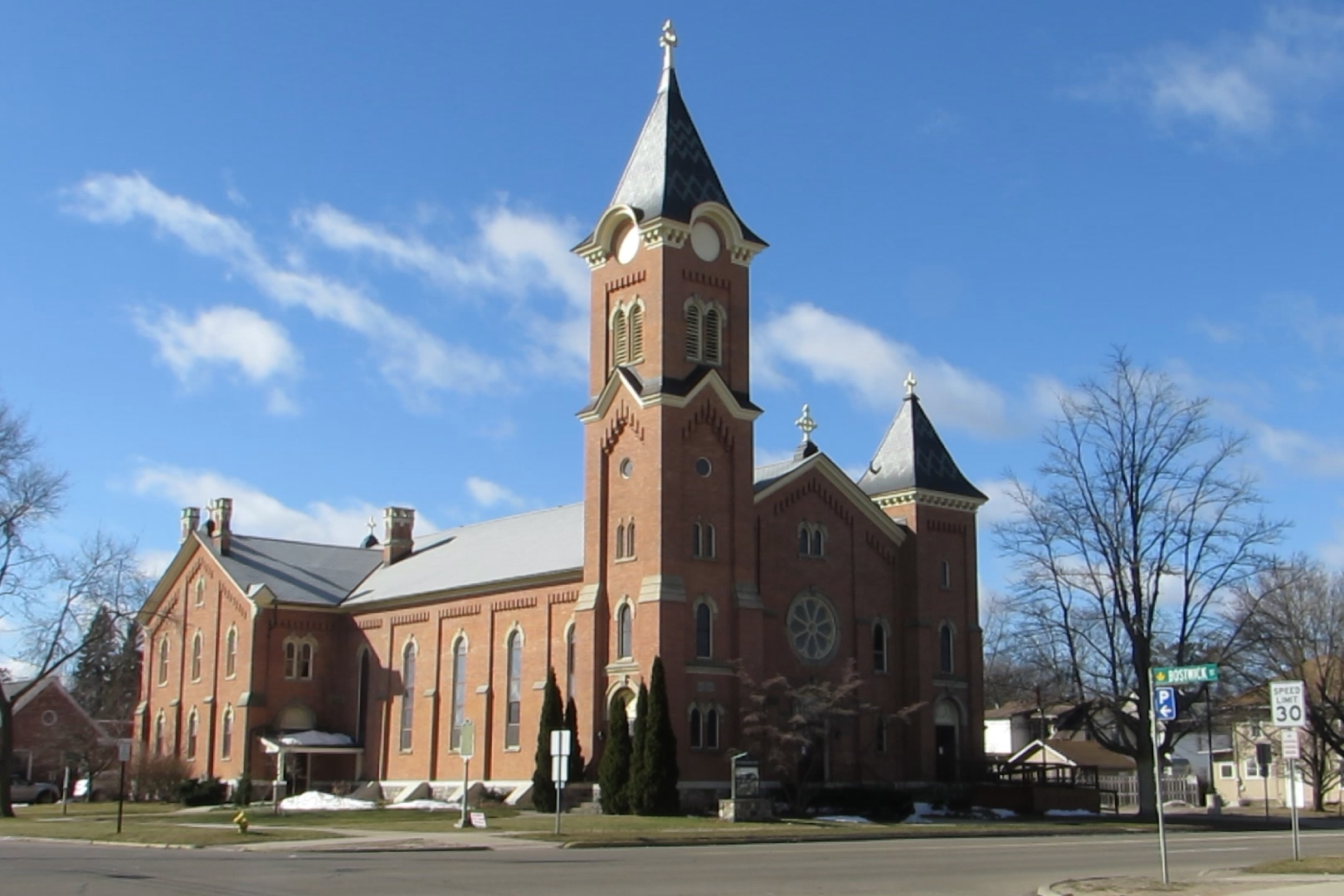 First Congregational Church, U.C.C. in Charlotte, Michigan, currently located at 106 S. Bostwick, originally met in the “Basswood Church” at the end of South Bostwick Street. By 1873, construction began at the current location. The Church hired Charles H. March of Rochester, New York as architect and appointed B.W. Warren as “treasurer of the building fund and general superintendant of the construction of the new building.”

In October 1873, the Church Trustees had purchased 191,000 bricks, 40 cords of stone, lumber nails and other materials to commence construction. The Republican (a former local paper) commented that “five men with the aid of a machine, molded … 15,000 bricks inside of 10 hours”. During 1874 another 100,000 bricks were purchased by the Church.

The rear portion of the church was dedicated on April 2, 1876. The Republican carried a lengthy report, which stated in part: “The lecture room has a seating capacity of 260…well lighted in the day through handsomely stained glass, and at night with beautiful chandeliers…

The floor is covered with an elegant centennial brown tapestry ingrain carpet of beautiful design. The seats… were obtained in Chicago and are of tasty workmanship in ash and black walnut woods.” The pulpit was locally made of ash, while the “speaker’s platform”, wainscoting, doors and covering are of oak.

The Church Sunday School students paid for nearly all of the stained glass windows. The windows in the sanctuary are the original windows, and their restoration is the next focus of the Church Trustees.

The Ladies Benevolent Society paid for the carpets, chandeliers and many other decorative touches, raising the money in part by hosting the “Lady Washington Tea Party” in celebration of the nation’s centennial.

The second story originally held the church parlor, pastor’s study and “Sabbath School” classrooms. The second story will not be on the Home Tour, but continues to hold the Sunday school classrooms for toddlers through 4th grade. The parlor was officially dedicated on June 6, 1876.

The next major changes to the Church came in the 1940’s. The church basement was remodeled to create a nursery and four Sunday School classrooms, also used by the Troop 45 Boy Scouts, as well as two restrooms. Once again, the Women’s Guild spearheaded the fundraising and it was fully paid in less than two years. The recent capital campaign provided funds to update the restrooms.

Also in the early 1940s, new carpet was installed in the sanctuary, and the pews rearranged to provide a center aisle. The altar was moved to the center and matching paraments were purchased for the altar, pulpit and lectern. (The current pews were installed in 1961 and the chancel area reconfigured again at that time.)

The original pipe organ was built in 1880. It was a two-manual tracker action organ with 1473 pipes. In 1945, the current organ was built by the Moller Company of Hagerstown, MD. They retained many of the existing pipes, but added more pipes for a total of approximately 1800 pipes. The third manual was added, and the tracker action was replaced by an electric action. The organ was restored in 1984, at which point the oboe stop was added. In the summer of 2011, the organ was completely renovated, including the conversion to solid state, the addition of many couplers and pistons, and the addition of several 32′ digital stops in the pedal. It now has 26 ranks.

While Jerre Fredenburg was leading the fund drive for the 1945 organ, her mother, Bess Fulton, headed the project to extend the church basement below the sanctuary. That space now includes a dining room and kitchen. Recent renovations include insulation of the kitchen wall, and volunteers have created a beautiful new “bride’s room”.

Michigan Bell telephone then erected a building on the site which was used through the 40’s and 50’s as the city and county switchboard. Direct-dial telephones finally brought an end to switchboards and the building was vacant by 1962. By 1963, First Congregational Church was the owner and used it for Sunday School classrooms and youth group meetings.

The Annex served as the location for the Charlotte Community Nursery Preschool from 1966 to 1970. Each week Preschool parents ended the week by coming in after Preschool on Friday late afternoon, and disassembling the Preschool tables, books and play area and putting them away so that Sunday School could be conducted on Sunday. The parents returned on Sunday evening or early Monday morning and reset the Preschool centers for their weekly sessions.

In August of 1993, the Church was listed on the National Register of Historic Places. The Church is also listed with the Michigan Register for Historical Preservation.

In 2009, the Annex was emptied in preparation for a complete renovation, and work began in 2010. The entrance was moved from facing Bostwick Street to the driveway shared with the Church. The Church office and pastors’ offices were relocated to the Annex. Just past the offices is the new Church library, a small conference room, and then at the far end of the hall is the large conference room. Church Boards and committees use the library and conference room for meetings and the large conference room hosts community groups and has been used for special services.

Most of the renovation was done by volunteers and by local business owners and their employees. The decorations were provided by members of the church’s Women Fellowship.

In late 2016, the church purchased the adjacent property, formerly a drive through bank, which had fallen into disrepair. Over the next few years, this property has been transformed from a vacant building and broken asphalt into a community-friendly green space.

Each summer, the church hosts several community events, such as music concerts, reading programs, and more. Weather-permitting, we also bring our Sunday morning worship service outside where people are free to spread out and enjoy this space. ✧